In a small walkway area at Dillingham Elementary, a group of students with spiral notebooks in hand sketch the first shoots of their small garden as local Austin College students and teachers monitor.

After the sketch, the college students lead the group in learning gardening basics before they head inside for a more traditional lesson. For the newly-formed DandeLions Garden Club, this is a typical meeting. 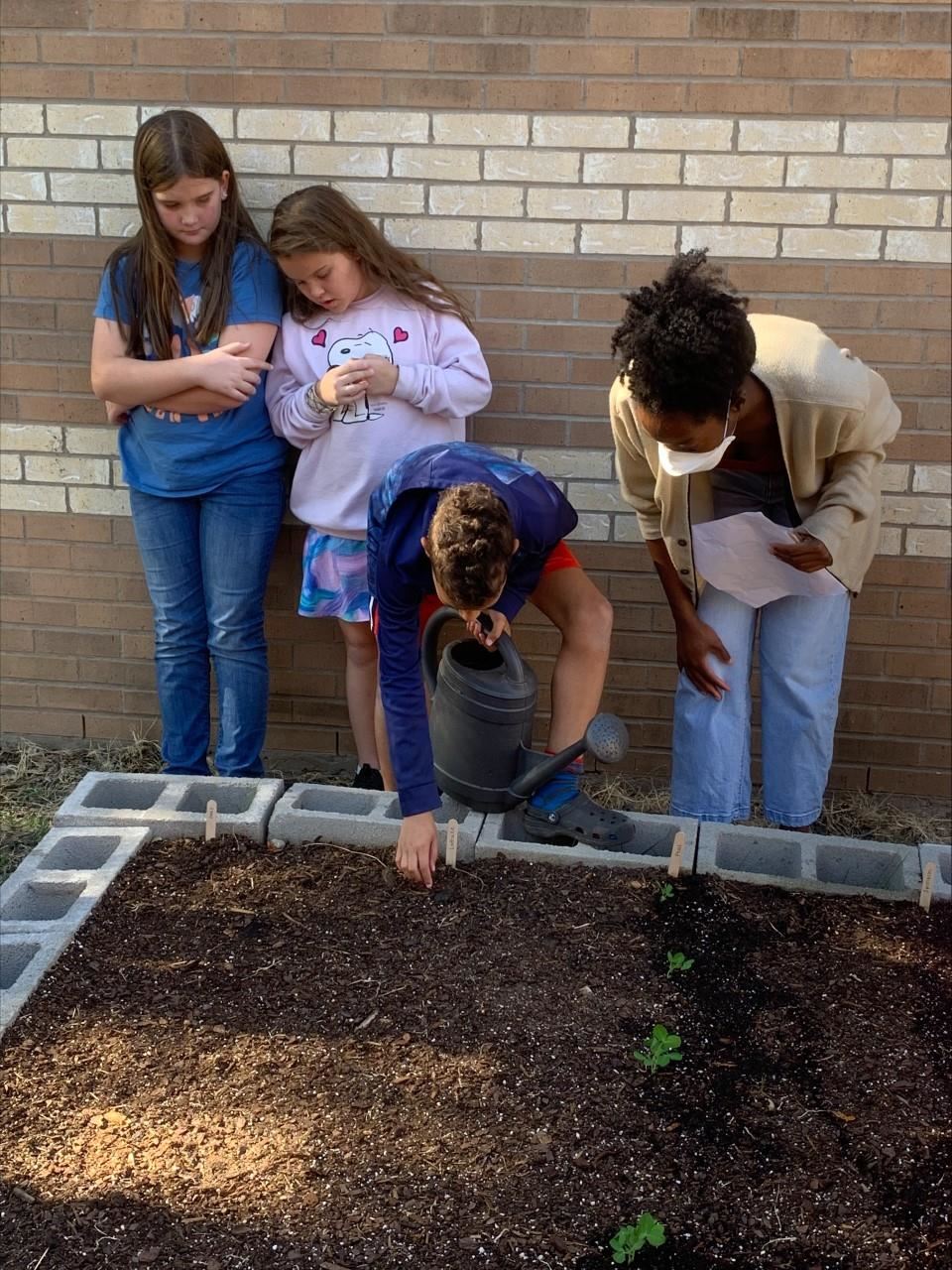 “The kids love it and are enjoying it,” said Leslie Rich, Dillingham counselor and club sponsor. “We had such a huge group of kids who wanted to be in it, but we had to limit it to 13.”

The DandeLions Garden Club was formed with a grant from Austin College’s Alpha Phi Omega service fraternity, and the club is helmed by Rich and Rebecca Osei, AC senior and the Alpha Phi Omega’s Vice President of Service.

“I was actually in a garden club when I was in elementary school, but it wasn’t really established,” Osei said. “The time felt so fast, and I don’t remember learning science concepts.”

When Osei connected with Rich through the people at the Sherman Community Garden, Rich suggested a garden be built at her new campus. Rich worked at Jefferson when it was an elementary school not too long ago, and it hosted a garden club as well. With some help over the summer, garden beds were installed.

“When we built the beds, Richard [Bayless, SCG groundskeeper] came out and lent us some supplies and his assistance,” Osei said. “A lot of us had never built a garden bed before.”

Since space was limited, the club picked two groups of 5th graders  to make sure they could reach as many students as possible.

“We will have a new group of students in the spring because so many wanted to do it,” Rich said. “There’s just not enough to do for 25, 30 students at the same time.”

Osei, a public health major, makes the short in-class lessons, a new skill she’s picked up, and each lesson relates back to the science of gardening, such as inherited traits, photosynthesis or the water cycle.

“I know when I was in elementary school, it was hard to see the application of what you’re learning,” Osei said. “You might forget some of it down the line, but these are scientific concepts that are important to know in the future, even if you aren’t a botanist.”

And not only does gardening teach basic skills like watering or measurement, but Rich said the time promotes building social skills and cooperative behavior. Feedback has been favorable on all sides as well.

“The parents were excited, too,” Rich said. “Both the parents and the students want to do clubs and other fun activities, so it’s very encouraging to see everything come together.”

As for the eventual harvest, the hope is that the vegetables, which range from spinach to garlic to peas, could possibly be prepared as a soup or some other dish.

“It’s been a lot of fun for all of us, really,” Rich added. “We have an assistant principal involved, a teacher involved. There’s a lot of people who are excited about this project.”

“I didn’t realize how much the club really meant to students-,” Osei added. “-until a student talked about how the club’s students should feel lucky because not every 5th grader got to join. Their friends thought it was cool. I wasn’t expecting that much excitement.”