Teacher of the Year Perks in Sherman ISD

“We know that teachers have a pretty thankless job so we figured out a way to give back. We thought of giving a free car for one year,” Sherman Chevrolet Sales Manager Matt Viers expressed to the audience during the meeting. “Each teacher is being awarded a Chevy Equinox to drive for a year. They both are now the proud recipients of a free car from Sherman Chevrolet.”

Both teachers were pleasantly surprised by the announcement and immediately left the meeting to pick up their new car.

“When they announced the car I thought it was a joke,” Suzanne Green admitted. “ Then he flashed the keys in front of us and my mind went completely blank. The only thing I could think was, ‘Is this real? This isn't real; OMG this is really happening!’ I am very grateful to Sherman Chevrolet for being willing to do this and supporting the community and SHS.”

Blanca Serrano said she was in shock and looked to her husband for confirmation during the meeting.

“It was unbelievable.  I looked to my husband for his reaction and he had the same face I did--stunned,” she explained. “Sherman Chevrolet is so kind and generous for doing this. I felt surprised and thankful to my students because they are the ones who have made the success possible.”

Serrano and Green will both submit their applications for the Region 10 Teacher of the Year award, which will be announced in August of 2019.

Suzanne Green Blanca Serrano both react to the news that she will be receiving a new car during the SISD Board meeting.

The SISD Elementary and Secondary Teachers of the year stand with Matt Viers of Sherman Chevrolet, SISD Superintendent Dr. David Hicks and SISD Board Members Tim Millerick and Hillary Clark. 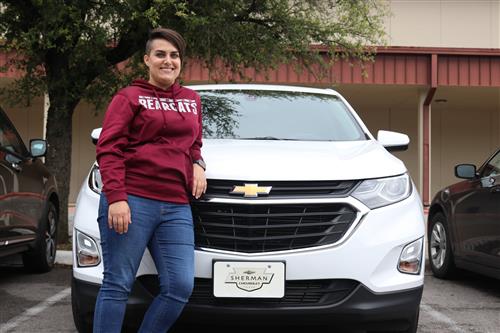 Suzanne Greene poses proudly in front of her new car and believes that education is a unique profession that takes a very special kind of person. 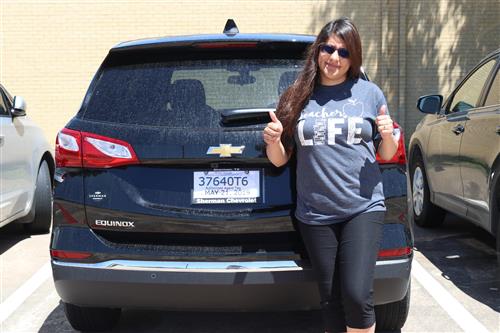 Blanca Serrano gives a thumbs up in front of her new car and says she doesn’t have words to express how thankful and blessed she is to have the support of her fellow staff and administrators, and community.